2. “Invisiblization” of the Damage and the Ending of Support for Evacuees

In the years since the accident at the Fukushima Daiichi Nuclear Power Plant, efforts have been ongoing to make the damage caused by the accident invisible. One remarkable example of this is the number of evacuees from the nuclear accident and their actual situation.

The number of nuclear accident evacuees

The number of evacuees from Fukushima Prefecture was reported to be 31,148 as of November 2019 (Reconstruction Agency). As this number had fallen to something over 160,000 people as of May 2012, the number of evacuees appears to have decreased significantly. In reality, however, many evacuees are not included in this figure.

Actual situation of evacuees due to the nuclear accident

Despite repeated requests from organizations supporting the evacuees, the Reconstruction Agency has not conducted a survey to discover the true situation regarding people who have evacuated from Fukushima. Surveys conducted by several local governments provide a glimpse of the harsh situation in which evacuees are placed.

(1)Survey by the Tokyo Metropolitan Government*1 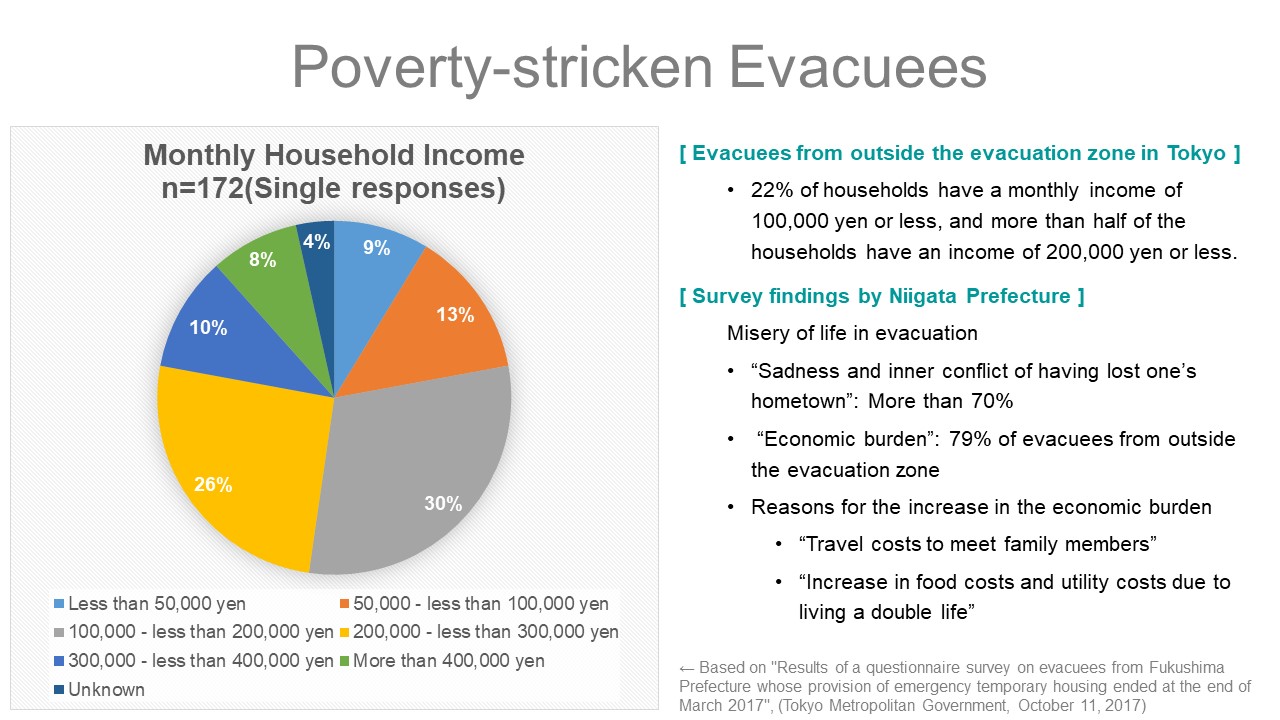 Termination of provision of housing

Despite the hard situation evacuees have been placed in, the national government has not taken any measures to support the lives of evacuees, and Fukushima Prefecture has gradually ceased to provide housing to evacuees, as shown below.

Considering the circumstances of evacuees’ lives, the government should continue not only to provide housing, but also provide more additional support.

*1.Tokyo Metropolitan Government, “Results of a questionnaire survey on evacuees from Fukushima Prefecture whose provision of emergency temporary housing ended at the end of March 2017”, October 11, 2017
*2.Niigata Prefecture, “Documents of the 5th Meeting of the Subcommittee on Daily Life of the Examination Committee on the Health and Lifestyle Impacts of the Nuclear Accident”, December 27, 2018