4. Deepening Confusion over the Handling of Offsite Waste Derived from the Fukushima Accident

The fate of waste contaminated by large amounts of radioactive material released from the Fukushima nuclear reactors remains confused. The biggest reason is that there is a double standard. The conventional radioactive clearance standard stipulated in the Act on the Regulation of Nuclear Source Material, Nuclear Fuel Material and Reactors is 100 becquerels per kilogram (Bq/kg). On the other hand, the newly stipulated standard in the Act on Special Measures concerning the handling of Environment Pollution by Radioactive Materials Discharged by the Nuclear Power Station Accident defines waste of 8000 Bq/kg or more as “designated waste,” allowing anything less than that to be disposed of in the same way as ordinary waste.

The current Situation of “designated waste” (waste of 8000 Bq/kg or more and 100,000 Bq/kg or less) under the Act on Special Measures is given below.

As of the end of 2018, 218,700 tons of waste were designated and stored in 11 prefectures. This waste is limited to incinerated ash, agriculture and forestry waste (such as rice straw and compost), soil generated in water purification and sewage sludge, and does not refer to all radioactive waste substances.

The partial revision of the enforcement regulations of the Act on Special Measures in 2016 made it possible to cancel the designation of designated waste, this cancellation being carried out in three prefectures: Yamagata, Miyagi, and Chiba. No progress has been made in other prefectures. 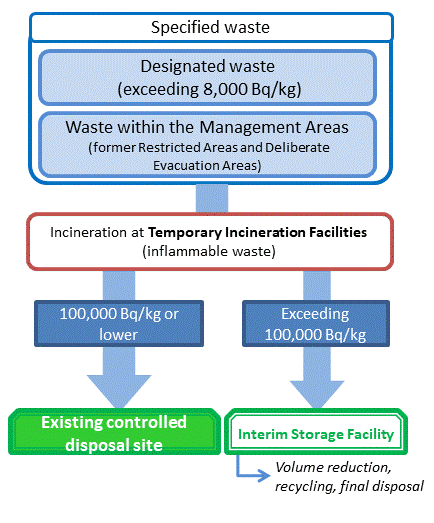 In 2018, there was a growing movement toward recycling removed soil (decontaminated soil) resulting from decontamination work or using it as landfill.

Demonstration projects by the Ministry of the Environment (MoE) are underway

The name “removed soil” is changed to “recycled materials” following sorting and treatment known as “recycled materials production.” MoE produced the “Technology Development Strategy for Volume Reduction and Recycling of Removed Soil in Interim Storage” and the “Concept on Safe Use of Removed Soil after Recycling” in 2016. Demonstration projects for recycling are being carried out in various places as follows.

Despite each demonstration project having the name “demonstration” attached to it, they each have aspects of actual implementation of the projects. MoE has already prepared ordinances or guidelines for the recycling and using as landfill soil resulting from decontamination both inside and outside Fukushima Prefecture, and is moving forward with plans to gradually implement recycling and landfill disposal in many locations. The series of nuclear waste policies, including the Act on Special Measures, aimed at putting radioactive contamination from the accident out of sight as if it had never existed, must be fundamentally reviewed.