3. Thyroid Cancer Confirmed or Suspected in more than 200 Fukushima Youth

According to data released by the Prefectural Oversight Committee for the Fukushima Health Management Survey, the number of children under 18 years of age at the time of the accident in Fukushima Prefecture who have been diagnosed with or are suspected of having thyroid cancer is 231 (as of the end of June 2019), of which 174 have been diagnosed with cancer after surgery.

In addition, at least 11 children with thyroid cancer have received surgery and treatment at Fukushima Medical University. This is because when they were not diagnosed as “having or suspected of having cancer” at the confirmatory examination but were diagnosed with thyroid cancer during the follow-up period, they were not included in the total number of the Fukushima Health Management Survey and treated as “outside the scope of the aggregate.”

In addition, it has been reported that there are 257 persons (as of December 2018) subject to the support project for patients who have undergone thyroid examinations in the Fukushima Health Management Survey. These people have been found to have nodular lesions such as lumps in the thyroid gland and are receiving some kind of treatment, but the details are not well known.

In any case, it is difficult to grasp the actual number, and it is considered that there are not a few patients who were “missed out” from the number of patients announced by the Fukushima Health Management Survey. Only fragmentary details regarding the surgical findings of patients have been described, but many have lymph node metastasis or extrathyroid extension, and some have distant metastases. 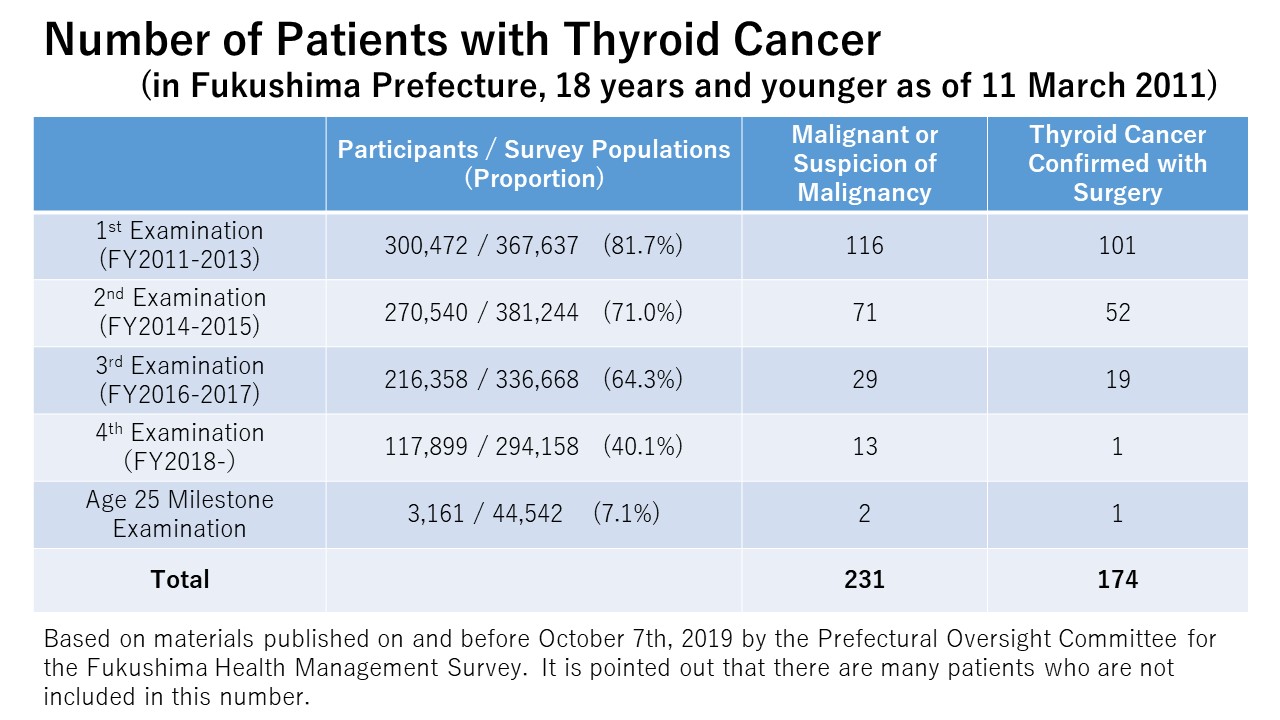 In December 2016, the private organization “3.11 Fund for Children with Thyroid Cancer” (headed by Hisako Sakiyama) founded a medical care benefit program for people living in Tokyo and 15 prefectures in eastern Japan, who were 18 years old or younger at the time of the Fukushima Nuclear Power plant accident and who developed thyroid cancer after the accident. By July 2019, medical expenses had been paid to 153 persons (101 in Fukushima Prefecture and 52 outside Fukushima Prefecture). Among the recipients, there were cases of recurrence and reoperation, and severe cases such as lung metastasis.

It is suspected that thyroid gland exposure was also made invisible in the early stages. According to exclusive research by the Tokyo Shimbun, an 11-year-old girl in the town of Futaba may have been exposed to an equivalent dose to the thyroid of an estimated 100 millisieverts of radiation immediately after the nuclear accident. According to the emergency medical care manual of Fukushima Prefecture at that time, if the body surface contamination of 13,000 cpm or more was measured in the screening for evacuees, thyroid gland measurement and administration of stable iodine tablets were to be carried out in addition to decontamination.

However, in fact, the 13,000 cpm level was raised to 100,000 cpm, and no thyroid gland measurements or other measures were carried out. The Local Nuclear Emergency Response Headquarters only measured the thyroid glands of 1,080 children in Iitate Village, Kawamata Town and Iwaki City during the period March 24 to 30, 2011. It was concluded that all of them were below 100 millisieverts and no further measurements were required. For residents in areas where evacuation orders were issued, measurements of the thyroid gland were not performed for the reason that “since they evacuated, they were not exposed to radiation.” In some cases, people evacuated in the same direction as the dense radioactive cloud (plume), and there is a possibility that they inhaled radioactive iodine while evacuating or at evacuation sites.